So the main thing I made for Millie was the train. She did’nt want the whole train as only from top front was going to be in shot, so I only made the main frame of it.
I looked at the drawings she had done on her blog to see what kind of style and shape she wanted, I then researched steam trains to have a look at them in more detail and to see how I should think about creating it. I got the basic look and image of the train and decided it would be best to make it out of bolster wood, paper mache and a tin can as the main train engine. I wanted to make it as realistic as possible so adding in the bits of wood at the sides and making the two different chimneys was important. Attaching the tin to the wood was a bit tricky as the surface was very shinny not much stuck to it, but a few hairbands held it in place whilst the glue dried enough for me paper mache it to stick more securely. After paper mache all of the train to give it some texture and to make sure all of the parts stayed in place, I left it to dry before giving it a coat of paint of which I the added the details such as the gold lines and the specific number onto the front. 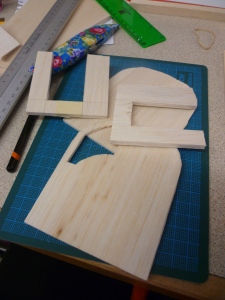 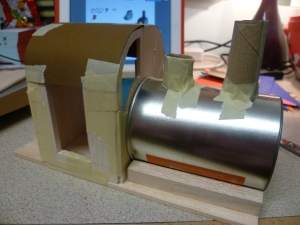 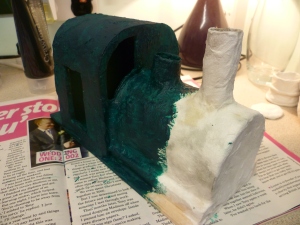