After we had left the paper mache over the weekend it had dried and was beginning to look really good. The way the tissue had dried over the sawdust had given it a textured feel although the floor was worn and distressed. We carried on with the paper mache over the part that we hadn’t done then went over the floor again with larger sheets of tissue just to give it another layer as well as adding to the lines and detailing of the floor with the edges of the tissue.
Once we had left it all to dry again over lunch I then started to attach some vines onto the right side of the set. Dewi wanted the vines to come from the bottom of the set then gradually fade out as it got further up, like they were fading away from the light, like vines would do in real life. He didn’t want to many on the set as the character rig needed to walk along so I made sure I kept the vines to a few. So I started gluing them on, making them intertwine with each other and attaching along the plinths keeping towards the walls, as this is how Dewi wanted them to be. 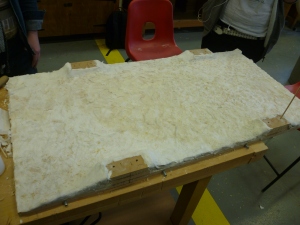 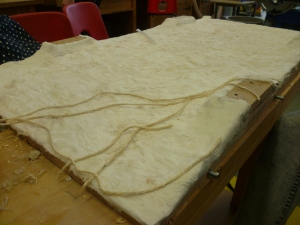 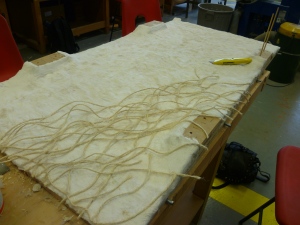