We finished giving the vines there grey coat today and I also had to add some extra vines to the middle of the set as Hannah and Dan had not made them reach out into the middle enough so I was asked by Dewi If I could put some extra’s in and paint them. There was also an issue with the second laser cut wall. Hannah had gone and done the second wall when me and Dan where out filming for our DFT project but she hadn’t done it to what Dewi wanted and it was very messy with the glue and not very neat, as the rope didn’t follow the lines of the laser cut, so he asked If i could do it again and match it up to my first wall. Because I was running out of time to do this, I decided to wait until next time. I also painted the top and bottom panel of the first wall grey to match the set. 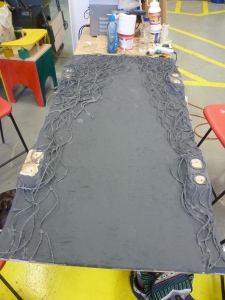 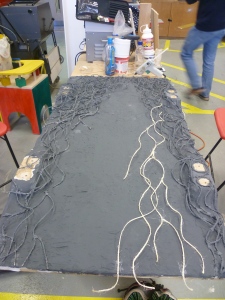