The paint had dried from yesterday so I sprayed it once again with another coat to try and cover the parts where it hadn’t stuck properly. So I gave it another coat but it still didn’t cover some of the patches, but they weren’t that visible and that was all that I could do, so I left them and thought I could see what I could do with the details on the plane. Dewi thought that It looked fine so I left it as that.
I then worked on the details on the plane. Because I wanted to make it as accurate as possible, I looked up to see what plane it was so I could have a look at the marking that were actually used. I found out that it was a Arado Ar 196 Norwegian Seaplane circa built in 1942 & used by the Nazi’s in World War 2.
So with this research I thought maybe It wouldn’t work so well having a Nazi plane in an English based film, as well as it not making sense! I still looked at the markings and decided to kind of stick to where (On the picture below) the yellow was placed on the edge of the wings and on the propeller motor. But using a different colour scheme as he wanted the struts that held the water feet to the wings and body of the plane to be black so I stuck with the red and black theme, adding a little symbol on the rudder to make it personalised along with Dewi’s initials! A very rare plane!
I was thinking of adding a British RAF target on the side along with some more details but with the time I had to do it I didn’t want it to be or look rushed so I decided to leave it as it was. I really liked painting this plane, I found it really enjoyable and it reminded me of doing Air-fix kits with my dad when I was young!!

Picture of the actual plane markings: 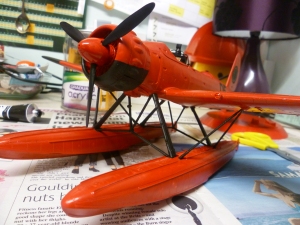 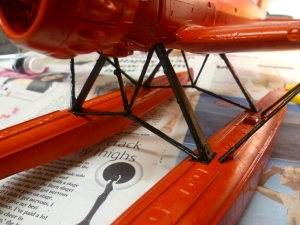